Why the Market Won’t Crash

No Crash Zone. A Current Outlook on the Housing Market.

Are you concerned that the housing market will crash like it did in 2008? That the cost of homes has skyrocketed so high that they are bound to come spiraling down and result in a market crash?

Well, that’s not the case; the housing market is not in danger of crashing. In fact, it’s quite the opposite. And there’s one word that will corroborate my reasoning: millennials.

Millennials Are on the Hunt for Homes 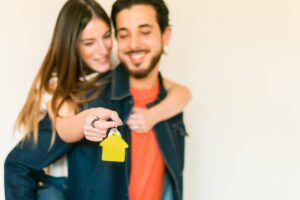 For over a decade, millennials have predominately been renting. They didn’t want to be tied to a mortgage or a location. They wanted

the freedom to pick up and move to a new city and a new job without the hassle of having to sell a home. Now, millennials are settling

down, raising families and want to secure their roots; they want to build equity and wealth in a home of their own. They want to buy –

and they have the money to do it.

Here’s a quick look at how the homebuyer demographic has changed. Back in 2010, the average age of homebuyers was between 45-49.

That number has been getting younger every year. In 2021, millennials accounted for more than half of all mortgage loan applications

in the U.S. It’s predicted that by 2025, the average age of those coming into the housing market will be between 30-34 years. Yes, that’s

Millennials Have the Money – and the Credit

In terms of credit, Millennials have some of the best scores we’ve seen in years. During the housing bubble in 2006, less

But they are facing one big hurdle…lack of housing inventory. Buying power isn’t very powerful if there’s nothing to buy.

Basically, we have more people wanting to buy homes than we have homes for them to buy. Why? Many builders were burned in the housing market crash of 2008. Because of this, they cut back

on new homebuilding out of fear of losing their shirts again. To give you a little context, in January 2006, 2.3 million homes were under construction. By January 2009, that number diminished to

490,000. A housing supply decrease of this magnitude eventually took its toll. Fact is, we haven’t built enough homes to keep up with the population. Let’s put this into perspective: 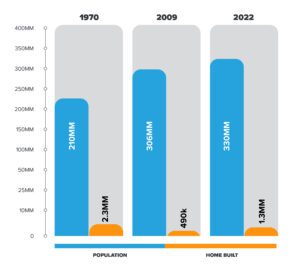 People aren’t moving as often. When I was growing up, people stayed in their homes for an average of only five years. Since 2008, that number has increased to 10 years. Much of this can be

attributed to the fact that today’s homes are larger and have fewer people living in them. There’s no need for them to upsize because they already have more than enough house for their family.

The increase in home prices has also been a huge deterrent to moving. And with inventory so low, there isn’t much in the way of choices either. If you find a home you like, you’re usually going up

against other bids, many of which are cash. It’s a tough buying market out there.

Until the market levels out and rates go down, most people are going to stay put. One of the biggest frustrations I hear from clients who are contemplating moving – so they can capitalize on the

equity in their current home – is, “Where will I move? If I end up renting for a year or more, I’ll be significantly dipping into my profit. Not sure it’s worth it.”

It’s a No Crash Zone

Even though prospective buyers don’t have the advantages they once had, we will continue to see a steady increase in home values. When this happens, contractors will

build more homes and homeowners will be more interested in selling, knowing that they will have a better chance getting into a home they love. Keep in mind, the most

important part of this equation is millennials. Not only are they the biggest demographic in the country, but the demographic that actively wants to buy.

While the housing market has shifted, it’s not the environment for a market crash, either. Too many people want to buy and there is too little inventory to go around. A

crash is the last thing I would predict. Housing prices would need to dip ridiculously low…and I don’t anticipate that happening at all. In terms of the housing market,

we’re in a no crash zone.

FHA Loans: What Are The Benefits And Features Aug 8 2022

FHA loans offer a 3.5% down payment requirement as well as lenient Debt-to-Income ratios (DTI) and credit requirements. They are ideal for low-to-moderate income earners, and people buying a home with less-than-perfect credit. Backed by the Federal Housing Authority, FHA loans are mortgages meant to support those who may not…
Read More of the post FHA Loans: What Are The Benefits And Features

[hbbutton link="https://homebridgeheloc.com/?utm_source=Heloc+Blog&utm_medium=button&utm_campaign=12+month+blog+campaign&utm_content=LContreras" title="Start Your HELOC" target="_blank"] So Is There a Home Equity Boom On The Horizon? As the volume of refinances fall with the rise of mortgage rates, homeowners are setting their sights on home equity lines of credit. Consumers are seeing an opportunity to take advantage of their home…
Read More of the post HELOCs Are On The Rise

There are definite benefits to being a freelance worker or independent contractor. You’re able to set your own schedule, and you can spend only a few hours at different jobs to get a well-rounded and engaging work experience. However, if you’re interested in buying a home, you may find that…
Read More of the post Helping 1099 Contract Employees Buy A Home