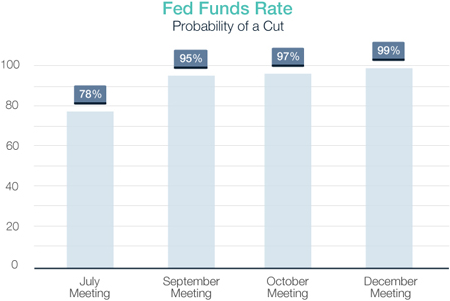 “Let the good times roll” (The Cars) — For the sixth consecutive week home loan rates declined, once again fueled by the ongoing trade tensions between the US and China.

However, the decline in rates was halted on the notion the Fed is likely to CUT rates soon. Huh? That’s right – a couple of Federal Reserve members were speaking this week and suggested that the time might be right for a Fed rate cut.

How come home loan rates didn’t improve further upon news? When the Fed cuts or lowers rates, they can only lower the Fed Funds Rate, which is an overnight lending rate between banks. The Fed doesn’t control home loan rates.

When the Fed cuts rates it is doing so to fuel economic growth and/or allow inflation to rise – both of these are bad for long-term rates like home loan rates. Additionally, stocks love Fed rate cuts and moved nicely higher midweek, taking money out of bonds thereby limiting their decline in yield or rates.

The ongoing trade tensions and slowing growth around the globe may very well continue to push home loan rates lower in the weeks and months ahead – but we must now pay attention to the Fed who will look to “help” the stock market from further declines by cutting rates. And anything that helps stocks is usually not great for home loan rates.

Bottom line – we are staring at 2-year lows in home loan rates and the time could not be much better to lock in on a purchase or refinance loan.

The upcoming week features several key economic reports, but trade issues and visions of rate cuts will continue to dominate the action.

Current trade headlines between the US and China, and the US and Mexico will continue to hold the US markets captive until a resolution can be agreed upon between the three countries.

Retail Sales and the Consumer Price Index will be released and will be key to gauge both consumer spending and inflation.

There will be no Fed speakers talking during the week as the quiet period begins ahead of the June 18-19 Fed meeting.

Since the outbreak of COVID-19 in the United States 3 months ago, many of our normal routines have been altered on a collective level. Companies such as Homebridge are no exception. Throughout the past several weeks, Homebridge has been taking massive steps to ensure that its associates are safe and…
Read More of the post How Homebridge is Responding to COVID-19

One week after home loan rates failed to improve further in the face of multiple bond-friendly stories, such as low inflation, high unemployment claims, and the Fed's continued commitment to purchase bonds, we watched home loan rates tick up this past week. Why? Oversupply. The U.S. Treasury announced they will…
Read More of the post A Lesson in Supply and Demand

Home loan rates continue to hover near all-time lows, but there are three reasons why they should have improved but didn’t. Let's take a look at some of the “bond-friendly” news from this week that was unable to push mortgage-backed security (MBS) prices higher and home loan rates lower. Unemployment: The…
Read More of the post Is This the Bottom?