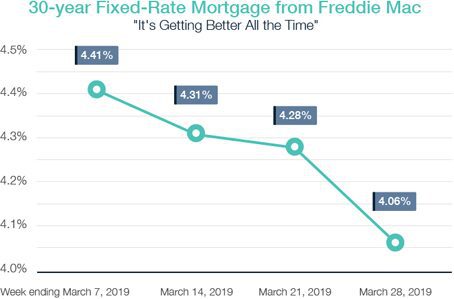 “It’s getting better all the time” (The Beatles) That is the best way to describe the current home loan rate environment. This past week we saw mortgage rates experience their largest one-week decline in 10 years!

What caused the sharp decline in home loan rates? Recessionary fears, and the likelihood the Fed’s next move on rates may be a cut and as soon as this year.

The Treasury’s Two-Month Bill yielded 2.40% this past week and the 10-Year Note yielded a low of 2.34%. This “inverted yield curve”, where short-term bonds yield more than long-term bonds, elevated the recession talk.

Bond yield curve inversions are not always accurate, and the lead time to a recession can be as much as three years.

It will be more important to track how the 2-Year Note, presently yielding 2.23%, performs against the 10-Year Note in the weeks and months ahead, because a sustained inversion between them would be a more serious recessionary signal.

The financial markets were spooked this week when potential Federal Reserve Board Nominee Stephen Moore said if he were brought onto the Fed, he would immediately vote for a .50% cut to the Fed Funds Rate. This surprise statement brought uncertainty to the financial markets, which led to Stocks moving lower and Bonds moving higher in price.

Bottom line: Inflation is not a threat, and was evidenced in last Friday’s PCE reading of just 1.8% year-over-year. Plus, the idea that the Fed may now cut rates next means this complacent “wait and see” attitude may continue to keep home loan rates at low levels for the spring homebuying season, and more.

The upcoming week will bring the March Non-Farm Payrolls (Jobs Report), which comes on the heels of February’s very weak 20,000 job reading.

Revisions for the two previous months will be key when the report comes out on Friday, especially if the February number gets bumped higher.

Wage growth, currently running at 3.4% year-over-year, and the highest in a decade, will also be delivered in this report. Should the wage gains increase further, bonds may not like the inflationary tone that goes along with higher wages.

On Wednesday, we will get a preview to the Jobs Report when the ADP Private Payrolls is released.

Any additional headlines surrounding recession fears will also play a role in which way both stocks and bonds trade.

As you can see there’s a lot of headline risk as we head into this week.