“Anticipation … is keeping me waiting.” Carly Simon. Between the April Jobs report, inflation news and the Fed meeting, investors had plenty to anticipate in the latest week.

The Jobs Report for April was a bit of a disappointment, as job creation rose from March but came in below expectations. There were 164,000 new jobs added in April, below the 190,000 expected, the Bureau of Labor Statistics reported. This was up, however, from the 135,000 recorded in March (which was revised higher from 103,000). The Unemployment Rate fell to an 18-year low of 3.9 percent. Wage growth fell to 2.6 percent on an annual basis, down from the 2.9 percent recorded in January. Month-over-month hourly earnings rose 0.1 percent versus the 0.2 percent expected. 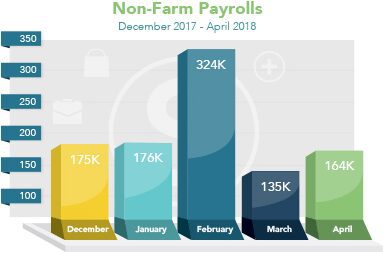 The Fed’s favorite inflation measure, annual Core Personal Consumption Expenditures (PCE), showed that inflation rose 1.9 percent in the 12 months through March. This was up from the 1.6 percent annual increase recorded in February. The Core reading excludes volatile food and energy prices. March’s number was the biggest increase since February 2017, and it brings annual Core PCE closer to the Fed’s target of 2.0 percent.

Inflation reduces the value of fixed investments, like Mortgage Bonds, meaning inflation can hurt Mortgage Bonds and the home loan rates tied to them. It will be important to see if signs of inflation remain in the air.

The Fed met and, as expected, left its benchmark Fed Funds Rate unchanged at 1.5 to 1.75 percent. This is the rate at which banks lend money to each other overnight, and it is not directly tied to home loan rates. The Fed noted, as mentioned above, that inflation has moved closer to its 2.0 percent target, employment growth has been strong, and that the economy is growing at a moderate rate.

Over in the housing sector, high demand plus a limited supply of homes for sale on the market pushed home prices higher in March. Research firm CoreLogic reported that home prices, including distressed sales, rose 7 percent from March 2017 to March 2018, while there was a 1.4 percent gain from February to March. Looking ahead, CoreLogic forecasts a 5.2 percent rise in home prices from March 2018 to March 2019.

News on both consumer and wholesale inflation could impact Mortgage Bonds and home loan rates.

Forecast for the week: