“Risin’ up to the challenge.” (Survivor) Home sales may have increased in March, but low inventory remained a challenge for many would-be buyers. 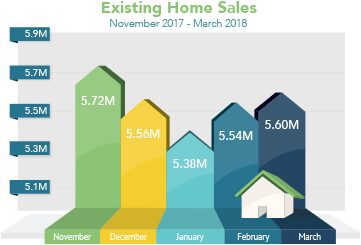 March existing home sales rose 1.1 percent from February to an annual rate of 5.60 million units, the National Association of REALTORS® reported. However, sales were down 1.2 percent from March 2017 due in part to continued low inventories and affordability issues. March saw just a 3.6-month supply of existing homes for sale on the market, well below the 6-month level that is considered healthy.

Inventory of new homes for sale on the market fared better in March, with a 5.2-month supply of homes available. March new home sales rose 4 percent from February to an annual rate of 694,000, a four-month high, per the Commerce Department. Sales also were up 8.8 percent from March 2017. However, there were considerable differences in sales around the country. In the Northeast, sales plunged 54.8 percent, while sales in the West soared to their highest level since December 2006, up 28.3 percent.

Finally, the Bureau of Economic Analysis reported that economic growth in the first quarter of 2018 slipped from the final three months of 2017, though the number did beat estimates. The first reading on first-quarter Gross Domestic Product (GDP) showed a gain of 2.3 percent, down from the 2.9 percent recorded in the previous quarter, but above the 2.1 percent expected. GDP is the monetary value of finished goods and services produced within a country’s borders in a specific time period. It is considered the broadest measure of economic activity.

This week’s calendar is bookended by the Fed’s favorite inflation measure and the Jobs Report for April.