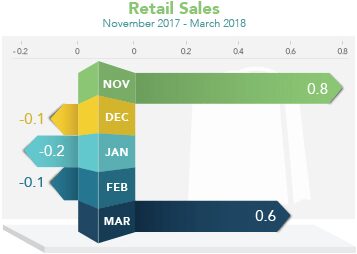 Retail sales rose 0.6 percent in March, above the 0.4 percent expected and up from the decline of 0.1 percent in February, the Commerce Department reported. Leading the boost was spending on automobiles, health and personal care items. Consumer spending makes up two-thirds of U.S. economic activity and is crucial to a healthy economy.

Housing starts also bloomed in March, rising 1.9 percent from February to an annual rate of 1.319 million units, per the Commerce Department. February’s figure was also revised higher to 1.295 million units. Housing starts got a big boost from a 16.1 percent monthly increase from the multi-dwelling sector. However, things were less rosy for those interested in single family homes, as single-family starts fell 3.7 percent from February. From March 2017 to March 2018, Housing starts were up 10.9 percent.

Building permits, a sign of future construction, rose 2.5 percent from February to March to an annual rate of 1.354 million. Limited inventory remains a challenge in many areas of the country, so it will be important to see if housing starts continue to blossom and if single family starts shift gears higher.