“You’re gonna hear me roar.” (Katy Perry) March may have come in like a lion, but consumer inflation was more of a whimper than a roar last month. 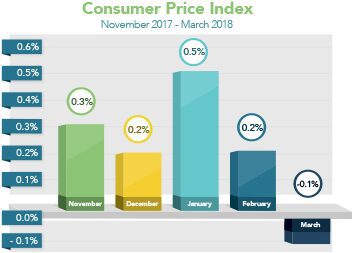 The Consumer Price Index (CPI) fell 0.1 percent in March, below the expected gain of 0.1 percent, the Bureau of Labor Statistics reported. Lower gas prices at the pump were to blame for the first decline in 10 months. When stripping out volatile food and energy prices, Core CPI was in line with expectations at 0.2 percent. However, Core CPI rose 2.1 percent on an annual basis, a 12-month high.

Inflation at the wholesale level was a bit hotter than expected, as the Producer Price Index (PPI) and Core PPI both rose 0.3 percent in March, versus the 0.2 percent expected.

Geopolitical headlines also garnered attention in the latest week, as heightened tensions over Syria between the U.S. and Russia helped bonds benefit temporarily from safe-haven trading. Earnings season also began, and there is a growing sense that corporate earnings for the first quarter could be strong due to the tax cuts. This could benefit stocks at the expense of mortgage bonds and home loan rates.

For now, mortgage bonds are trapped in a sideways trading pattern that began in mid-February. Home loan rates remain just above all-time lows.