“Don’t you shiver, shiver, shiver.” (Coldplay) Job growth slowed in March due in part to harsh weather across much of the country, but there’s more to this story. 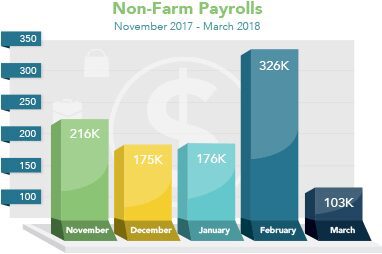 Average hourly earnings came in at 0.3 percent, higher than expectations. Annual wage growth ticked up to 2.7 percent in March from 2.6 percent for the 12 months ending in February. The first quarter of 2018 also saw higher job growth than the same period last year, as an average of 202,000 new jobs were created in the first three months of 2018 compared to 177,000 in 2017. Overall, despite the disappointing headline number, there was some positive news in the report.

Extreme volatility continued in the markets this week, as uncertainty regarding tariffs and a trade war with China caused wild swings in stocks. Mortgage bonds were stuck in a sideways trading pattern, while home loan rates remain historically attractive.

If you or someone you know has any questions about home loan products, please give me a call. I’d be happy to help.