“I don’t know why I go to extremes.” (Billy Joel) Extreme volatility in the markets was the norm in recent days, due in part to fears of inflation and higher rates. Plus, home prices continue to rise across the country. 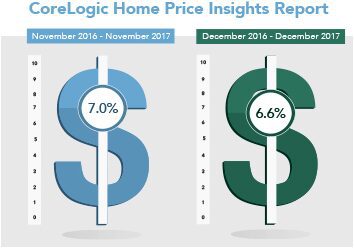 Data analytics firm CoreLogic reported that home prices nationwide, including distressed sales, rose 6.6 percent from December 2016 to December 2017. Prices also increased 0.5 percent from November to December. CoreLogic noted that rising incomes and consumer confidence have increased the number of prospective buyers. This increase in potential buyers, coupled with limited inventories of homes for sale on the market, continues to drive prices higher across the country. Looking ahead, CoreLogic forecasts that price gains may cool a bit, with a 4.3 percent gain expected from December 2017 to December 2018.

Though there weren’t any inflation reports in the latest week, inflation played a part in the volatility the markets experienced. The January jobs report saw a higher-than-expected rise in wages, which came on the heels of the January FOMC meeting statement in which the Fed said that inflation could move higher in 2018.

At present, the annualized Core Personal Consumption Expenditures, the Fed’s favorite inflation gauge, is still at a low 1.5 percent, below the Fed’s target range of 2 percent. The Fed, and investors, will be watching the upcoming inflation reports closely to see if signs of an increase in inflation are present.

The government briefly shut down at midnight on Friday but re-opened several hours later after the House approved a spending bill that will fund the government until March 23.

The second half of the week features key reports on inflation, housing and manufacturing.

If you or someone you know has questions about home loan rates and products, please contact me. I’m always happy to help.