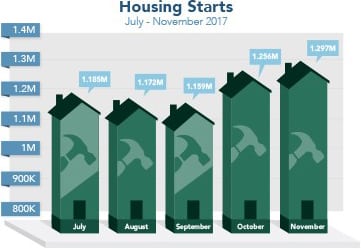 Building permits, a sign of future construction, fell 1.4 percent from October to an annual rate of 1.298 million units, though this figure was above expectations.

Home sales were also strong, as November existing home sales hit an 11-year high, surging 5.6 percent from October. The National Association of REALTORS® reported that existing home sales reached an annual rate of 5.81 million units, with three of the four major regions of the country producing gains. November new home sales rose 17.5 percent from October to an annual rate of 733,000 units, a ten-year high, per the Commerce Department. That was the biggest monthly gain since January 1992. Sales of new homes were also up nearly a whopping 27 percent from November 2016.

However, low inventory remains a challenge in many areas, as total inventories slumped nearly 10 percent from last year to just a 3.4-month supply for existing homes. Inventories of new homes also remained on the low end with just a 4.6-month supply. A 6-month supply is considered a normal inventory level.

Economic growth remained solid in the third quarter of 2017, spurred on by robust business spending that was well above weak levels experienced at the beginning of the year. The final read on third-quarter Gross Domestic Product rose 3.2 percent, just above the 3.1 percent from the second quarter.

The Fed’s favorite inflation reading, Core Personal Consumption Expenditures, showed that inflation remains tame, as the November reading was in line with expectations. Low inflation typically benefits fixed assets like mortgage bonds, and the home loan rates tied to them.

Last, but certainly not least, the House and the Senate passed the Tax Cuts and Jobs Act, which sent the major stock indexes to fresh record highs, while mortgage bond prices edged lower. Looking ahead, it is still unclear what long-term impact the bill will have, but with the corporate tax cuts included, the bill could favor stock markets.

At this time, home loan rates remain attractive and near historic lows.

Just a few economic reports highlight an otherwise shortened trading week. All markets will be closed on Monday for the Christmas holiday. On Friday, the bond markets will close early at 2:00 p.m. ET, while stocks are open for a normal session.