“You gotta break all the records set.” (Rod Stewart). New home sales increased across the country in October, breaking through to their best level in a decade. 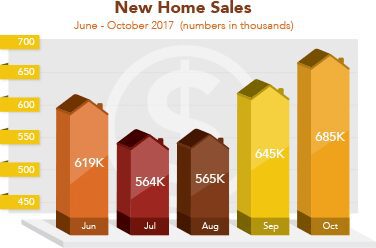 The Commerce Department reported that sales of new homes in October rose to their highest level in 10 years, rising 6.2 percent from September to an annual rate of 685,000 units, above the 629,000 expected. September was revised lower to 645,000 units from 667,000. Year-over-year, new home sales rose 18.7 percent. Currently, there is a 4.9-month supply of new homes for sale on the market. A six-month supply is seen as a healthy balance between supply and demand.

Home prices continued to rise in September, buoyed by low mortgage rates, an improving economy and a strong labor market. The September S&P/Case-Shiller 20-City Home Price Index rose 6.2 percent year-over-year, above the 5.8 percent registered in August. It was the biggest increase in more than three years.

Meanwhile, inflation remained tame in October. The Fed’s favorite inflation gauge, Core Personal Consumption Expenditures (PCE), was up 0.2 percent from September. Year-over-year, Core PCE was 1.4, up from 1.3 percent the month prior, remaining well below the Fed’s 2 percent target range.

At this time, home loan rates remain in attractive territory.

The Fed will be watching for the latest employment figures as the November Jobs Report is delivered on Friday.