“A little dancing and some sentiment to put your mind at ease.” (Lou Reed) Home prices continued to surge, and consumers have happy feet over employment and wage prospects. 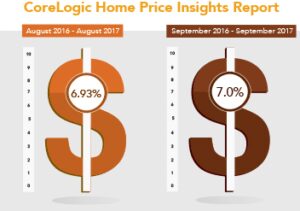 Although the Consumer Sentiment Index declined slightly in early November, it remained at its second highest level since January with a preliminary reading of 97.8, per the University of Michigan report. An improving labor market was spontaneously mentioned by a record number of consumers, and anticipated wage gains recorded their highest two-month level in a decade. These favorable trends were countered by expectations that inflation and interest rates will increase during the year ahead.

In a week light on economic data, headlines were dominated by rising tensions in the Middle East, which pushed oil prices to two-year highs, and tax reform proposals out of Washington, which kept investors on guard.

A deluge of economic data will vie for the spotlight this week.