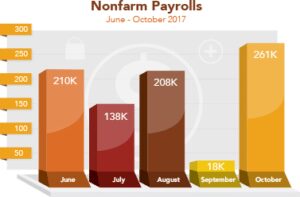 Total non-farm payroll rose by 261,000 new jobs in October, the Labor Department reported. The unemployment rate edged down to 4.1 percent, its lowest level since 2006. Data for August and September was revised higher by a total of 90,000 new jobs. Average hourly earnings were flat. Overall, the report was positive heading into the holiday shopping season. More people working equals more consumer spending, which boosts the economy.

Subdued inflation was on the minds of Federal Open Market Committee (FOMC) members when they met October 31 and November 1. Core Personal Consumption Expenditures (PCE), the Fed’s favorite inflation gauge, which strips out volatile food and energy prices, remained at 0.1 percent in September. Year-over-year, Core PCE was unchanged at 1.3 percent, well below the Fed’s target of 2 percent. Continued low inflation has benefited fixed assets like mortgage bonds, and the home loan rates tied to them.

As expected, the FOMC left the benchmark Fed funds rate unchanged. This is the rate at which banks lend to one another overnight. The Fed’s monetary policy statement noted the labor market has continued to strengthen and that economic activity has risen despite hurricane-related issues. Also, President Trump nominated Fed Governor Jerome Powell as the next Fed Chair to replace Janet Yellen in February. Powell is seen as somewhat dovish and aligned with current Fed Chair Yellen when it comes to interest-rate policy, so his nomination likely will not be a major disruption to the markets.