“Time keeps on slippin’.” (Steve Miller Band) While prospective homebuyers want to move through the process of getting into their dream home, that reality keeps slipping due, in part, to limited inventory. 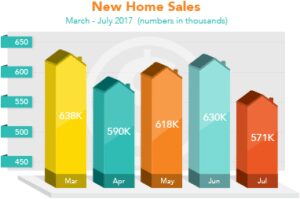 After a strong start to summer, new home sales took a dive in July. The Commerce Department reported July new home sales fell by 9.4 percent from June to an annualized rate of 571,000 units, below the 615,000 expected, and a seven-month low. On a positive note, June was revised higher to 630,000 units from 610,000. Sales inventory for new homes rose to 5.8 months in July, up from 5.2 months in June; this is near the healthy rate of a six-month supply. Year-over-year, sales were down nearly 9 percent.

Existing home sales in July slipped for the second straight month as large declines in the Northeast and Midwest outweighed sales increases in the South and West, according to the National Association of REALTORS® (NAR). Total existing home sales slipped 1.3 percent in July to 5.44 million units from a downwardly-revised 5.51 million in June. Although July’s sales pace is 2.1 percent above a year ago, it is the lowest of 2017. Total existing housing inventory at the end of July declined 1 percent to a 4.2-month supply and is now 9 percent lower than a year ago.

Lawrence Yun, NAR chief economist, said, “Buyer interest in most of the country has held up strongly this summer and homes are selling fast, but the negative effect of not enough inventory to choose from and its pressure on overall affordability put the brakes on what should’ve been a higher sales pace.”

While limited inventory may be a pain point in the homebuying process, the good news is home loan rates are still near record lows.

Job data and inflation are the stars of the week.

If you or someone you know has questions about home loan products or current rates, please contact me. I’d be happy to help.